There is a lot of truth behind the saying ‘Asians cant drive’. It sounds racist, yes but the data demonstrates how countries in South East Asia have one of the most dangerous roads in the world.

The statistic is disturbing. In the last decade, around 70,000 Malaysians were killed due to road accidents, resulting to around USD20 billion of potential economic loss to the country.

Our life is valuable. We have to fix this plague and encourage drivers to be safer on the road.

From then on, embedded in our hearts and minds is a mission to create safer roads in the world using data insights and impactful engagements.

The idea for DriveMark mobile telematics app was first mooted in 2016 as an extension of KATSANA Advanced Telematics / Fleet management system. KATSANA was established in 2013 with focus on vehicle tracking system (tracking stolen cars using GPS). In 2014 onwards, the team designed a driver scoring system to allow fleet managers to have better understanding of driver behavior behind the wheels.

In 2016, the team realised that in order to encourage safer driving habits among Malaysians, the driver score system has to be widely adopted by drivers, motor insurers and other related parties. This is where we decided to develop DriveMark as a smartphone app for iOS and Androids.

Wrapping DriveMark as an app gives us a lot of flexibilities and advantages.

First, we are no longer tied with hardware telematics. Users can now install DriveMark at no cost whatsoever on mobile phones, and start tracking their behavior immediately. Costly hardware is now a thing of the past. Secondly, app-based telematics is vastly scalable and offer a much faster access to the market. We are no longer required to have a ground support team to fix vehicle tracking hardwares or to pay for mobile connectivity fees.

This flexibility and scalability advantage is immensely critical in helping DriveMark getting adopted by the entire spectrum of the automotive industry.

Development of DriveMark starts with the ideation and design stage. Ideation is the phase of setting up DriveMark objectives, target user demographic and most importantly creative direction for the app. This includes strategic business decisions that play a main role in defining the app and its purpose.

The initial brief was simple – “an app to score driver behavior and to let them know that good score can lead to insurance discount”.

With that brief, our product team initiated a ‘gamification’ class with the engineering team. We feel that the app should be fun to use, and users are highly engaged to ensure continuous use and relevancy. Learning from mistakes of other usage-based insurance products and knowing that the team consists of several veteran game engineers, a strategic decision was made to include gamification elements into the app.

First released in September 2017 (exactly a year ago), the app was engineered by our small skunkworks team of 3 as an experiment to test several hypotheses. 3 months of development was considered fast with respect to the scale of the app, thanks to pre-existing KATSANA Platform backend & infrastructure that was already mature. In this case, DriveMark is essentially just another data-source medium in our myriad of tracking hardwares already on the KATSANA Platform.

As we already have 5 years of experience in hardware-based GPS tracking systems & telematics before DriveMark is developed, we are excited to test the hypothesis that mobile telematics is a good and reliable enough medium to profile driver behavior. You see, hardware telematics offers the most precise measure of data because it is often running 24×7 and tied directly to the vehicle. It is also much harder to interfere with. As such, hardware telematics is able to gather more data points such as OBD information compared to software telematics.

However, we have the idea that while more data is good, it does not mean limited data is bad. DriveMark version 1.0 was a test bed for us to compare the precision of data collected from smartphones against data collected from our telematic hardwares.

The outcome is almost as predicted. While hardware data offers more information, we find that the score correlation between Katsana telematics hardware and DriveMark smartphone app is mostly at par with each other. This proves that if we know what to look for, smartphone sensors are good enough for usage-based insurance purposes.

I say ‘almost’ as predicted because we soon discover that with DriveMark, we also know if the user is currently abroad. This data is not available through hardware-telematics and opens up possibilities for DriveMark to go beyond motor insurance. I’ll elaborate on this in another article. 🙂

As the team is familiar with social network effect (and the team previously developed a social platform that has 180,000 communities world-wide), we have a belief that there are opportunities to inject social mesh within usage-based insurance programs. This transparency of driver score will encourage competitive motivations among users to be crowned as the best drivers among their circle of friends.

Extending this competitiveness further, we then introduce nationwide Safe Driving challenge with the help of our partner, Petronas Dagangan Berhad. Within just two weeks, 6000 users were onboard, collecting around 1.3 million kms of travel data, consisting of 20,000 trips.

Do you know that Malaysians are addicted to Facebook and Twitter? We are one of the most active countries on social networking sites. Hence its not far-fetched to think that we might be open to share our location to family members, and close friends. We discover that this is not true. While Malaysians are open to share on social network about almost everything, we somehow (thankfully) guard location privacy seriously, even among family members. In DriveMark v1.0, we dabbled into a feature called ‘Circle’ where users can share location to all within their circle.

Based on direct user inputs during DriveMark 1.0 user engagement session / post-mortem back in January 2018, we soon discovered that users are not familiar with the concept of location sharing and/or the feature is simply inconsistent with the objective of creating safer roads.

In DriveMark version 2.0, we decided to get rid of Circle, and put our focus on features that align with safer driving objective.

3 months after the release of DriveMark 1.0 in September 2017, the team organised a post-mortem. The week-long session consists of UX workshop among product and engineering teams, discussions on mission and objective of DriveMark 2.0, and finally interviews with existing & target users of DriveMark. 10 users were interviewed to collect feedbacks of features in DriveMark, and to gauge their understanding of the value in using the app. We also recorded their facial expressions and finger movement while navigating DriveMark as these visual cues are an important indicator on the friendliness of the app.

These learnings are highly impactful to our roadmap for DriveMark version 2.0 onwards. We envision DriveMark to go beyond motor insurance, and become an ecosystem that rewards safe drivers. With the backing of industry partners, we are adding more reward components such as cash for fuel, Petronas Mesra points, redeemable coupons, dashcams, GPS trackers, child seats and others. So the hottie at the office finally asked you out. After saying yes three times due to shock, you have to find date spots for a perfect date that show...

What is Windscreen Insurance Coverage? In Malaysia, windscreen insurance/coverage is a type of additional protection specifically for your car’s windscreen. It is an add-on to your current car insurance policy,... 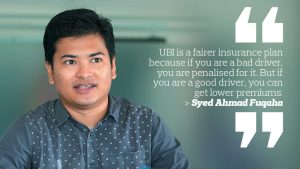 The second phase of the liberalisation of motor insurance, which kicked off on July 1, has seen the introduction of usage-based insurance (UBI) in the Malaysian market. The product allows...